Boats and Economic Woes: Naval Conflict in the Persian Gulf

Iran projects influence across the Middle East through its network of aligned quasi-state groups, most notably in Iraq, Syria and Lebanon. In cyberspace Tehran has the ability to target critical national infrastructure and other economic facilities. Yet it is in the maritime domain where Iran’s ‘forward defence’ strategy – the notion that Tehran’s adversaries should be confronted away from Iranian territory – could most seriously challenge national and economic security in the region.

Iran shares around 600 miles of coastline with the Persian Gulf. This narrow sea is one of the most important global economic throughways,  transporting 21% of the world’s petroleum and a third of all seaborne oil equating to around 17 million barrels a day. All of this shipping has to pass through Straits of Hormuz, which at just 21 miles wide, is a potential chokepoint. 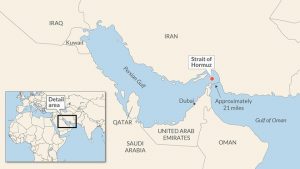 It has been estimated that if Iran was able to shut off the Gulf, the price of Brent crude could rise to $150 and the resulting decline in GDP would be equivalent to a trade war between the USA and China.

But why would Iran choose to do this? First, the Gulf functions as a buffer zone between itself and Saudi Arabia and the UAE, its closest geopolitical rivals. Iran’s commitment to defending the Gulf should not be underestimated. “In the event of any threats” an Islamic Revolutionary Guard Corps (IRGC) commander, Alireza Tangsiri, stated last April, “we will not have the slightest hesitation to protect and defend Iran’s waterway”.

Obstructing the Persian Gulf could also serve Tehran’s wider political aims. As noted, the Persian Gulf is a potential vulnerability in the global oil supply chain. Causing chaos in the Straits could force the USA to lift some of the restrictive economic sanctions that have crippled Iran’s economy. Nevertheless, this is not a risk-free strategy. Based in nearby Bahrain, the USA’s Fifth Fleet provides the force that underpins the ‘Carter Doctrine’ which commits the USA to preventing any actor from interfering with the critical transportation of fossil fuels through the Straits.  It is therefore important to understand what assets and capabilities Iran has at its disposal that would allow it to confront the US and its allies in the Persian Gulf.

Iran does not operate a traditional siloed military structure but divides capabilities and responsibilities between the IRGC on one hand –  which has a privileged position within the Iranian hierarchy due to its relationship with Ali Khamenei Iran’s Supreme Leader – and the regular ‘Artesh’ forces on the other. 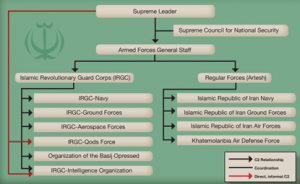 Founded in the aftermath of the 1979 revolution, the IRGC’s raison d’être is the preservation of the Islamic regime. In the maritime domain this means the IRGC’s navy (IRGCN) is responsible for the security of the Persian Gulf. In contrast, the Artesh navy looks after the less strategically significant Caspian Sea and Gulf of Oman theatres, although both operate around the Straits of Hormuz.

Iran’s surface fleet is unlikely to play a major role in a conflict around the Straits of Hormuz. According to the IISS’s Military Balance+ database, the regular navy operates 5 Vosper and 2 Bayandor ships. Although Iranian media describes them as frigates they are – realistically – corvettes by international standards and lack the muscle to seriously challenge the Fifth Fleet in a conventional conflict.

The underwater domain is a different story. Iran has 7 Russian Kilo-class diesel submarines. Although the combination of the Kilo’s design and the geography of the Gulf means detection of these vessels is difficult, the shallowness of the water in the theatre may limit their effectiveness against military assets. However, they pose a threat beyond the Gulf of Oman which means that civilian shipping is vulnerable if Tehran decided to obstruct the global supply chain of oil.

Iran’s stockpiles of naval mines also poses a serious challenge. The hydrography of the Persian Gulf makes mines a central component of the IRGCN’s potential to turn the Straits of Hormuz into an extremely hazardous operating environment. In an eerie parallel to the dangers that coalition land forces faced from improvised explosive devices (IEDs) in Iraq and Afghanistan, naval mines may undermine the superiority that the US enjoys over Iran in conventional weapons. This is particularly relevant given that mine countermeasures (MCMs) have been somewhat neglected in recent years. The title of a recent article published in ProPublica neatly captures the problem: ‘Iran Has Hundreds of Naval Mines. U.S. Navy Minesweepers Find Old Dishwashers and Car Parts’.

As noted, Tehran’s adversaries possess a technological, numerical and firepower advantage over the IRGCN in the Persian Gulf. Therefore, Iran’s anticipated strategy is to deploy large numbers of small, fast boats in the hope of overwhelming an adversary’s defence system before they are detected. Estimates as to the number of ‘fast’ boats that the IRGCN can deploy vary from 283 to over 1500, depending on how each class is classified.

One of the more threatening models is the Seraj-1, based on the British Bladerunner 51. Capable of reaching speeds of between 55 and 72 knots, they are equipped with rocket launchers and anti-aircraft machineguns. Their small size, speed, manoeuvrability and the ability to ‘swarm’ these vessels means they have the potential to seriously threaten warships.

Their speed also allows them to quickly surround and capture civilian shipping; these boats were used to carry out the string of raids against shipping in 2019. War games have also revealed the extent to which the US Navy may be underprepared to face this method of naval combat. The infamous ‘Millennium Challenge 2002’ simulated exercise, involving an ‘Iran-like opponent’ ended with 20,000  casualties, 19 ships sunk and a humiliating defeat for the US Navy.

Iran’s forward defence doctrine is reliant on effectively leveraging the potential of asymmetric weapons in order to carry out a prolonged ‘naval guerrilla’ campaign. To facilitate this strategy both the IRGCN and Iranian Navy have bases are scattered across the Persian Gulf. Although significant amounts of the English language open-source information concerning Iran’s naval bases is out of date, it is possible to identify most of these facilities:

The two main bases, located at Bander-e Abbas and Bandar-e Bushehr, have significant command and control, repair and logistical facilities. Bander-e Abbas, pictured, below even has a mock-up of an aircraft carrier which has been used for naval exercises. 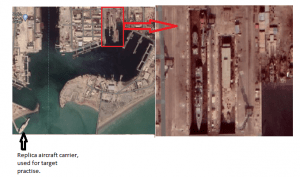 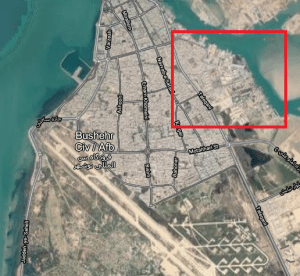 However, not all bases are created equal. For example, Abu Musa and Pasabanda bases (shown below respectively) are little more than launching sites for Iran’s attack boats. 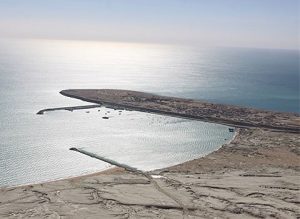 Although this prevents the country’s naval forces being destroyed in a single engagement (an outcome that Iran learnt to avoid in 1988), it limits the amount of firepower that can be easily deployed in any one location. However, these smaller bases are also important locations for deploying UAVs, which are crucial to Iran’s ISTAR capabilities. This acts as a force multiplier for Iran’s other weapons. 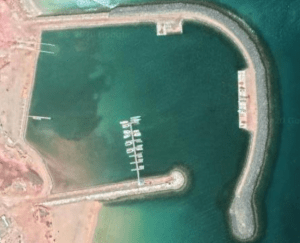 Patrolled by two distinct navies with multiple bases and equipped with a range of asymmetric weapons, Tehran can quickly turn the Persian Gulf into a very hostile and difficult theatre for both civilian and military vessels to operate in. As James Short describes, ‘Iranian defenders will concentrate asymmetric firepower and effort at the narrowest and most convoluted points in the Strait, where an enemy’s whereabouts are known in advance, targeting is easy, and escape is hard’.

Critically to the broader political objectives of the ‘forward defence’ strategy, Iran would seek to deny an adversary a quick victory, but instead drag them into a difficult and prolonged engagement. This holds even before one takes into account Tehran’s most advanced capability – its inventory of missiles.

Since Tehran lacks a modern air force that can compete for aerial superiority, ballistic and cruise missiles are the primary weapon in any deterrence or anti-access area denial (A2AD) strategy. Its arsenal, which includes platforms with a reported range of up to 2000 kilometres, contains a substantial number of close-range, short-range and medium-range ballistic missiles (CR/SR/MRBMs). 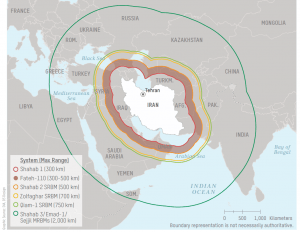 Of relevance to Iran’s maritime doctrine, the IRGC successfully tested an anti-ship ballistic missile early in the last decade. In 2019 they further increased their offensive capabilities, claiming to have successfully tested a submarine-launched anti-ship missile. Other reports suggest that Iran possess rockets that are able to lock onto land and ship based radar systems, turning an advanced American capability into a point of weakness.

The ability to pair cruise missiles and weaponised drones with deadly precision was demonstrated during the attack on the ARAMCO oil facilities in September 2019. In particular, the failure of the site’s US-supplied Patriot missile defence system to neutralise the attack was particularly concerning for the US and its allies who use the capability. Consequently, anti-missile units have become a priority for the USA’s modernisation programmes.

Finally, Iran has obtained its own air defence system. In 2016 it deployed the Russian SA-20C air defence system which poses a genuine threat to modern fighter jets. A month prior to the attack on ARAMCO, President Hassan Rouhani revealed that Iran had developed an improved version of the Russian S-300 surface-to-air missile system (SAM). The Pentagon have described these developments as a ‘generational improvement in capabilities’.

Although targets at higher end of Iran’s claimed ranges (1000km and beyond) might be beyond the effective capability of Iran’s missile arsenal, they will have no difficulty in striking targets within the Persian Gulf or Gulf of Oman. With the novel ability to challenge the USA’s assumption of aerial dominance, there are new risks to consider when deciding how many resources to commit to confront belligerent behaviour in the Persian Gulf.

Implications for the Persian Gulf

Whilst there is no chance of Iran obtaining dominance in the Persian Gulf, this is not the regime’s objective. As we have seen, the real danger lies in either the USA or its Gulf-based allies being drawn into a prolonged engagement that pulls the rug from under the global oil supply chain. The rippling effects of which could lead to the strategic calculus changing to favour concessions being granted to Iran in exchange for a return to stability in the Persian Gulf.

However, it is also important to remember that this doctrine is one aspect of a wider ‘forward defence’ strategy that itself comes from a position of weakness. Economically crippled by sanctions the regime – deeply unpopular at home – seeks to confront Iran’s rivals abroad in order perpetuate the myth of the Islamic revolution and bolster support for the government. However, reality forces Tehran to pursue its objectives through subversive and asymmetric tactics. The threat in the Persian Gulf is therefore real, but not existential, and can be managed without a major escalation providing that the nature of the threat is well understood.