Between 2000 and 2011, Turkey’s relationship with Syria was a model of Turkey’s reorientation towards the Arab world and its ‘zero problems with neighbours’ foreign policy. Free trade deals were struck, the borders were open and diplomatic ties were strengthened by Turkey’s opposition to the 2003 US invasion of Iraq.

However, once the Syrian uprising began in 2011 this amity vanished. The apparent successes of the Tunisian and Egyptian revolutions shifted Turkey’s stance to openly supporting democratising movements. Then as the Syrian uprising descended into a bloody civil war, Ankara sought to expand its regional influence, bringing it into direct opposition with the government of President Bashir Assad. Following Russia’s armed intervention in Syria in 2015 (where protecting the regime was made a priority) Turkey quickly found that it had burned all ties with a government that it could not topple.

Turkey’s strategic aims with regards to Syria are now twofold. First, it aims to degrade perceived threat which stems from the emergence of a potentially hostile Kurdish administration on its southern border. Second, Ankara wants to stabilise the flow of refugees from Syria into Turkey. This is becoming more pressing given the situation in Idlib, where the final pocket of resistance to Assad which looks set to fall.

However, Ankara will find the second of these goals extremely difficult to achieve. The main problem for President Erdoğan is this: he has no wish to come into direct confrontation with Russia given Turkey’s relative weakness and to protect the functional, if not necessarily amicable, relationship between Ankara and Moscow. Nor will Turkey receive international or NATO support for such an endeavour, in what is essentially a globally strategic backwater.

A Recent Timeline of Turkey’s Actions in Syria

Since the peace process between Ankara and Abdullah Öcalan’s Kurdistan Workers Party (PKK) – a US-designated terror group – collapsed in 2015 the prospect of an autonomous Kurdish region on the Turkish-Syrian border has been unacceptable for President Erdoğan. Consequently, Turkey launched armed incursions under the names Operation Euphrates Shield (2016-17) and Operation Olive Branch (2018) to undermine the real or imagined transnational links between the YPG and PKK.

In October 2019 President Donald Trump announced that the US would withdraw its forces from north-east Syria. Sensing an opportunity to weaken the now internationally isolated SDF, Operation ‘Peace Spring’ was launched by Turkey on October 9. Without US support, the SDF turned to Assad to avoid annihilation. Subsequently, regime forces moved into strategic points in Rojava. Shortly after, President Erdoğan and Russia’s President Putin signed a ‘memorandum of understanding’ on October 22 which resulted in the creation of a buffer or ‘safe zone’ between the SDF and Turkey and the establishment of twelve outposts within Idlib to monitor the ceasefire.

However, this hastily assembled equilibrium broke down on February 28 when the regime resumed its assault on Idlib. After a joint Russian-Syrian airstrike killed 27 Turkish soldiers in Idlib, Operation Spring Shield resulted in Turkish airpower and artillery dominating Syrian ground forces. After 8 days, Moscow and Ankara agreed to an ‘Additional Protocol’ to the 2018 de-escalation deal, on March 5. This second agreement committed to creating a 12km ‘security corridor’ around the strategic M4 highway and made a vague reference to jointly tackling terrorism in Syria. 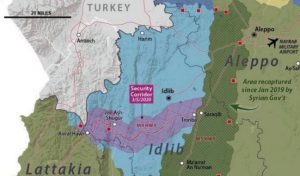 Despite the tactical dominance of Turkey’s most recent incursion, Ankara faces significant barriers to achieving its goals vis-à-vis Syria given the constraints that Russia’s involvement in the conflict poses.

In response to a string of electoral defeats for President Erdoğan’s Justice and Development Party (AKP) in July 2019 – which have been partially attributed to the perception amongst voters that the state has been unable to prevent substantial numbers of refugees from entering Turkey –  Ankara’s policy towards displaced people has hardened. As of April 17, the UN estimates there are over 3.5 million Syrians in Turkey. These numbers also look set to rise. Out of 3 million people who live in Idlib province, around 900,000 are estimated to be IDPs from other parts of Syria. 500,000 have fled indiscriminate bombing by the government and Russia since December. The impact of the regime’s recent focus on Idlib can already be seen in the extent to which IDPs have grouped in the area between Idlib and the Turkish border between 2019 and 2020.

As the last remaining pocket of Syrian territory outside of regime or SDF control, Assad looks set to resume campaigning in Idlib in the near future. Turkey will protest, but Ankara’s unwillingness to confront Russia means the assault is all but guaranteed. Consequently, thousands more refugees will likely flee towards the border and a large number of battle-hardened jihadist fighters could join them if Idlib falls to the Assad regime.

Furthermore, the ‘safe zone’, stretching from Ras al-Din to Tal Abyad and to a depth of 32km, will only remain secure if Turkey maintains a significant military presence. 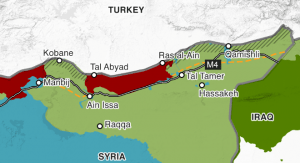 This could quickly turn into a prolonged counterinsurgency campaign against various Kurdish factions including the PKK, which has decades of experience in fighting the Turkish armed forces and will be operating in friendly territory. The recent car bomb attack in Afrin in the border Hatay Province, that killed over 40 on April 28 could be the tip of the iceberg of an asymmetric campaign against Turkey and its rebel-allies. Due to the difficulties in achieving long-term political goals via military occupation and Turkey’s unwillingness to directly confront Russia on the battlefield, Ankara may turn to its bevy of rebel proxies to influence events on the ground. However, this strategy also has significant drawbacks.

At roughly the same time as Operation Peace Spring was launched, Turkey unilaterally consolidated over 40 anti-Assad rebel groups, including the Free Syrian Army (FSA), into the Syrian National Army (SNA) under the direction of the Turkish Ministry of Defense and National Intelligence Organization (MIT), in order to better direct their activities in Syria. However, the composition of this coalition which, includes secular revolutionary groups, nationally orientated Islamists and Salafi-Jihadists, may work against Turkey’s goals given the divergent interests of the disparate rebel factions under the SNA banner.

Far from furthering Turkish interests, the use of proxies may actually undermine Ankara’s attempts to stabilize an enclave in which refugees can be resettled. Some of these groups have been accused of using white phosphorus against Kurdish civilians. Other accusations include the summary execution of civilians. In March the UN stated that Turkey could be complicit in committing war crimes in Syria. These atrocities against civilians will almost certainly lead to a spike in asymmetric attacks in retribution, similar to the recent bomb attack in Afrin, from various Kurdish factions.

Complicating Turkey’s efforts to control developments on the ground in Idlib, the area is dominated by the jihadist group Hayat Tahrir al-Sham (HTS), the successor to Jabhat al-Nusra. Officially, HTS considers the secular Turkish state to be an apostate institution but the group has cooperated with the Turkish armed forces during periods of battlefield loss. A recently linked speech from a senior HTS figure, known as al-Farghali, tried to justify this cooperation to the rank-and-file of HTS in Idlib.

However, recent evidence suggests that HTS has its own internal problems. Several of its popular leaders, including the President of the group’s Shura Council, have recently defected from the group. There have been reports of clashes with an al-Qaeda affiliated group in the area which has raised suggestions that internal cleavages in the group may widen. Such an event would all but destroy Ankara’s ability to shape events within Idlib and would hasten Assad’s reconquest of the region.

Furthermore, the most recent agreement signed with Russia on March 5 contained a commitment to countering extremism in Syria. Although HTS was not specifically mentioned, Russia could use the language in the memorandum to leverage Turkey to abandon its support for HTS. Support for the group could, therefore, be dropped in favor of a higher priority aim.

There is one further area of significance to emerge from the latest round of fighting, which may have longer-term consequences beyond Syria. Turkey’s natively manufactured offensive Anka-S and Bayraktar armed unmanned aerial vehicles (AUAVs) which were developed in response to a US-export ban have performed well on the battlefield. Ankara claims to have disabled or destroyed dozens of Syrian tanks, armored vehicles, and artillery pieces and killed a hundred more Syrian personnel between February 27 and March 5. Despite the loss of some AUAVs to Syrian air defense systems, the performance of Turkey’s drones during Operation Spring Shield has generally been considered strong. One reason for this is the apparent success of the Koral jamming system, an electronic warfare (EW) unit produced by the Turkish defence company Aselsan. It also appears that Russia may have deployed its own EW devices to disrupt Turkish air operations. This could provide valuable intelligence to NATO on Russia’s EW capabilities given the fears Russia’s superiority in this domain.

In the short term, Turkey can prevent Idlib from falling to the regime with a ‘feed the chaos’ strategy which prevents a single actor from winning a decisive victory. This could be achieved by providing aerial, artillery, intelligence and logistical support to HTS. However, this would break the terms of the March 5 agreement with Russia and could be very damaging for NATO or the European Union’s (EU) support for Turkey’s aims in Syria. In the long term, the use of rebel groups, which recent history suggests that Turkey cannot control, will likely undermine Turkey’s international credibility and lead to more terror attacks on Turkish soil and on the ‘safe zone’ which sits on territory the SDF will try to reclaim.

A diplomatic solution with the Assad regime might be Turkey’s best option, but this presents a whole new range of issues, not least the pragmatic relationship established between the SDF and the regime following the US’s withdrawal. Additionally, reports emerging from Syria suggest that the regime faces its own problems, both from Russia and within its own borders which seems unlikely to lend itself to a peaceful settlement.

The most humane and potentially most effective policy Turkey could pursue with regards to IDPs and Syrian refugees would be to work closely with the EU, UN and international organisations. The EU already funds 64 humanitarian projects in Turkey at the cost of over €3 billion per year and has a special interest in solving the refugee crisis given a domestic opinion on the matter. However, whilst the international community prioritizes the response to the COVID-19 pandemic, the large-scale movement of people seems unlikely. This is especially tragic given the devasting impact of the virus is predicted to cause amongst IDPs in Syria.

At the very least, Ankara needs to find a way of insulating itself from the worst effects of the Syrian Civil War without sacrificing the humanitarian needs of the Syrian people. Unfortunately, Ankara’s relative weakness compared to Moscow fatally constrains its options.