The impact of Kenya’s recent terrorist attack will be felt greatly by its tourism industry. Terrorism, and insecurity generally, is largely responsible for the sector’s poor performance over the last decade.

Between 2011 and 2017, there were on average 60 attacks each year carried out by different groups, each varying in magnitude. Over half of them are suspected to have been perpetrated by al-Shabaab. These include high-profile attacks in 2002 on Paradise hotel in Mombasa, the Westgate shopping mall in 2013 and Garissa University in 2015.

This had a huge impact on tourism numbers. Kenya’s vision 2030 – a development plan which aims to transform Kenya into a middle-income country – sought to increase tourism arrivals from 1.7 million in 2012 to three million visitors by 2017. But in 2017 the actual arrivals were only 1.45 million. 2014 was a particularly challenging year for the sector, as this was when terrorist attacks peaked at close to 100 incidences. The recent attack raises concerns that those dependent on tourism face the prospect of prolonged stagnation in the sector and job losses yet again.

Through my research I examine the impact of terrorism and travel advisories on tourism.

Each terror attack has a different impact on tourism and this is influenced by variables such as the scale of the attack in terms of lives affected (casualty and fatality levels), the damage to and type of property or facilities targeted, and the length of the siege. These all dictate the level of international media exposure, and the level of perceived risk among business and leisure travellers.

My research analyses the combined data of attacks over several years and tourism arrivals to find an average effect. The number of fatalities and casualties are used as a measure of the scale of the attack.

On average, I found that there was a reduction of about 2508 visitors per year for every one fatality. This translates roughly to a loss of about Ksh157.1 million (about USD$1.5million) in tourism revenue per year for each fatality. These losses don’t capture the longer-term effects such as lost growth opportunities, or the social costs of lost lives and job losses.

The losses are felt by a range of people: hotel operators, taxi drivers, food vendors, tour guides and more. In some areas communities depend on tourists as clients for their curios or because they lease their land to hotel operators. On the coast, the fortunes of tourism-based towns like Malindi have declined.

In the longer term, the country’s competitiveness as a destination is compromised. Fewer tourists are willing to come and players in the tourism sector suffer as operational costs increase.

The government realises the significance of the sector and it is one of the six priority sectors in its development blueprint.

Kenya’s tourism industry is heavily focused on its beaches and wildlife – as is Tanzania’s. That means tourists have alternatives within the region and can easily switch to competing destinations if Kenya’s security continues to deteriorate.

Kenya’s advantage over the competition elsewhere in Eastern Africa has been in its high level of international air connectivity, better local infrastructure and tourist facilities. The main sources of tourists are Europe (particularly the UK, Germany and Italy) and the US, though there’s also been an uptick in the numbers from Asia (especially China) and other African countries.

The government has already tried to make improvements to the industry. For example it implemented a program that gave incentives to charter flights and launched an aggressive marketing campaign, under Magical Kenya – the tourism board’s platform.

The aim, in addition to keeping visitors coming, was to attract tourists from non-traditional countries – like those in Asia, the Middle East and other African countries.

The government has also invested in security. In 2016 it adopted a national strategy to counter violent extremism, implemented through the national counter-terrorism centre.

The effort shows. The prevailing sentiment is that the response to the recent attack was more efficient than during the Westgate attack. But more can be done.

There needs to be better security and monitoring along the Somali border. This should be done using a mix of technology – like surveillance and bomb detection systems. This is crucial because of the limitations of ground based security forces and physical barriers. International and regional cooperation in intelligence and information sharing will help to improve effectiveness and lower costs.

Terrorists do not live in isolation; they live within communities. Support for initiatives like Nyumba Kumi, which promotes community unity and policing, can complement other security measures.

Ultimately, though, a comprehensive strategy must be developed to deal with the political and ideological sources of conflict that have fractured Somalia. Countries in the region must support Somalia so that it is stable enough to eliminate the threat of terrorism by the al-Shabaab group.

It’s imperative that Kenya continues to keep making these strides. If it doesn’t, tourists will steer clear and opt for alternative destinations. 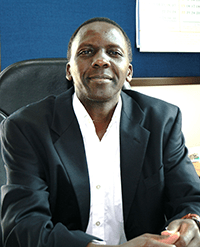 Professor Steven Buigut is Professor of Economics at the American University in Dubai. He received his MA and PhD in Economics from the Andrew Young School of Policy Studies at Georgia State University. He also holds an MPhil and BSc in Agricultural Economics from Moi and Egerton universities in Kenya respectively. He has served as Chair of the Accounting and Finance department and Associate Dean of the School of Business Administration for nearly 7 years. His teaching interests include Macroeconomics, Applied Econometrics, Monetary and International Economics.

Professor Buigut’s research interests include Monetary Economics and International Finance. A significant part of his research has focused on regional integration effort in developing and emerging economies, especially the Sub-Saharan African. He is also keen on Tourism Economics. He has published in several journals including the Review of Development Economics, World Development, International Finance, South African Journal of Economics, Tourism Economics, Tourism Analysis, Poetics, and International Journal of Social Economics, among others. Professor Buigut has also done consulting work for several training and research institutions such as AERC, KIPPRA, and APHRC.