Racism is Still Rife Throughout China: Why it Won’t Have an Effect on Diplomatic Relations Between China and Africa

The abhorrent racism experienced by African people living in Guangzhou, China has caused a media furore throughout the world. Highlighting the possible decline of China-Africa relations. However, this issue of racism goes beyond simply concocting a negative perception of China for Africans living in and out of the country. One could argue that this racism experienced by Africans may have a detrimental effect on a bilateral relationship between Africa and China. Although this is unlikely. The lack of explicit response from a plethora of African nations exposes a deep-seated issue within African politics that values future investment and economic growth over the treatment of their own people. Countries such as Kenya have received significant investment and loans from China. The ODI estimates that lending from China makes up 33 percent of external debt service in Kenya. Despite the long-term economic growth created by these loans, it has also inundated Kenya with debt leaving them at the metaphorical mercy of their government.

A Brief History of China’s relationship with Africa

Shelton (2001) argues that China’s relationship with Africa has always been based on economic interaction with the goal of China becoming a global superpower whilst facilitating Africa’s integration into the global economy. Africa has long been targeted for Foreign Direct Investment (FDI) due to its factor endowments, for example, oil in Nigeria or minerals such as diamonds in Botswana. This has been China’s focus in modern Sino-African relations which is echoed by Cornelissen and Taylor (2000) who stated that China’s economic interest is based on China’s demand for energy (oil) or Africa’s raw materials and natural resources. This is reflected in the growth of Sino-African trade volume which in 1980 was $1 billion (Wall Street Journal, 2012) growing to $185 billion in 2018. (China-Africa research initiative, 2020). In return for this FDI China has created jobs as well as providing unconditional and low-rate credit lines with the rate at 1.5% over 15 to 20 years (Le Monde Diplomatique, 2005). This underlines the beginning of a mutually beneficial relationship between China and Africa.

The growth in bilateral trade between China and Africa can be seen in the figure below: 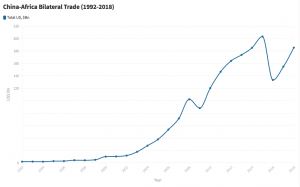 The figure clearly shows how quickly trade has grown between China and Africa over the last three decades, peaking in 2015 with total trade amounting to $203bn. This is a significant increase since the beginning of the millennium when the total trade volume was only at $9.86bn.

However, China’s relationship with Africa hasn’t exclusively been economic. The continent has benefitted from aid, most notably newly independent nations in the 1960s and 1970s. One of the most famous projects was the Tazara railway from Tanzania to Zambia which China helped to finance. Alongside accepting aid from China, military cooperation through the provision of military equipment has enabled African countries such as Egypt and Libya to fight radicalism within their country. This was all done without military deployment as Xi Jinping stated that ‘China strongly believes Africa belongs to the African people and African problems should be handled by the African people’ (Reuters, 2015) at a FOCAC meeting in Johannesburg.

The appearance of a mutually beneficial relationship between China and Africa has often been criticised as a self-interested facade focused on allowing China to become a global superpower. Hanauer (2014) cites critics of the relationship believing that ‘China perpetuates a neo-colonial relationship in which Africa exports raw materials to China in exchange for manufactured goods.’ However, this is a very myopic way of viewing Sino-African relations. China has provided African countries with the long-run economic growth required to facilitate its integration into the global economy. This underlines the main reason why a breakdown in relations between Africans living in Guangzhou and locals will have no effect on future investment into the continent. The figure below shows the countries where China has invested the most in (by number of projects). 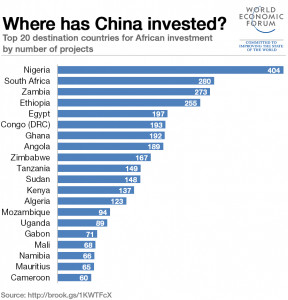 The graph shows that China has invested in South Africa and Nigeria the most. With China investing heavily in Nigeria’s oil sector whilst investing heavily in mining in South Africa. Therefore, it is no coincidence that these two countries have the largest economies in Africa with $397 billion and $368 billion respectively (nominal GDP) according to data from the World Bank (2020). Both countries rely heavily on China to continuing growing. The need for Chinese investment will become even more prevalent due to Covid-19 inducing the contraction of both countries’ economies. This mixture of fact and prediction underlines that the growth of certain African economies is dependent on the Chinese government. This is especially true for South Africa and Zambia (third in number of projects). The World Bank (2020) predicted that South Africa’s economic growth is expected to contract from 2.4% in 2019 to between -2.1 and -5.1% in 2020, sparking the region’s first recession in 25 years. In order to combat this loss of growth South Africa, like many other African countries may look to China for loans and investments to boost their economies allowing for long-run economic growth as part of China’s belt and road initiative.

This is a similar story in Zambia, which is one of China’s most prominent debtor. China’s investment has led to significant infrastructure being built within the country however at a great cost. As Zambia continues to default on its loans China is now seeking to control ‘over Glencore’s Zambian operation Mopani, which may be heading towards a sale, and the country’s largest producer, First Quantum Minerals.’ (CNBC, 2020). This is a sign of the control that China is beginning to assume over African countries as part of a ‘debt trap’ that leaves African governments unable to take effective action against the everyday racism experienced by its people living in China. 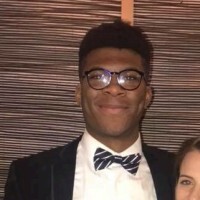