Since the outbreak of the COVID-19 pandemic, human trafficking issues have been worsening in Southeast Asia. A simple reason is that, due to the lockdowns and social distancing, illicit activities have become harder to be detected, and it has become even more difficult to provide direct assistance for vulnerable communities and survivors. For those vulnerable people such as women and children, they have suffered more in an exploitive situation due to the economic impact. This year is a daunting alarm for many countries in Southeast Asia to combating human trafficking.

Human trafficking is nothing new, and there are long-time battles between governments and human traffickers across the region. Traffickers use means such as fraud, force, or coercion for labor or sexual exploitation. Traffickers lure their victims in their illicit schemes, including domestic servitude, forced marriage, child soldiers, and organ harvesting. A great number of people are trafficked in Southeast Asia, and governments have been striving for combating human trafficking crimes over the past decades.

What We Have Learned from the Past

The United Nations (UN) estimates that 40.3 million people were in situations of modern slavery or forced labor globally. The human trafficking issue in Southeast Asia, similar to other regions, has three features. The first is transnational. Based on the statistics from the United Nations Crime Trends Survey (UN-CTS), Vietnam, the Philippines, and Thailand have ranked top in the total number of detected victims since 2007.  The 2016 Global Report on Trafficking in Persons reported that more than 85 percent of victims were trafficked across the region. Among them, Malaysia and Thailand were human traffickers’ destinations from neighboring countries. Fifty-one percent of victims in the region were women, and nearly a third of the victims were children.

The second is complex. The United States Department of State Trafficking in Persons Report 2019 listed most Southeast Asian countries as either Tier 2 or Tier 3 watchlists, the two most concerning categories. The report has pointed out that human trafficking is still a massive problem in the region, which connects with different types of crime, such as forced labor (construction, fishing, agriculture, mining, logging, and manufacturing sectors), sex trafficking (fraud, commercial sex acts, and coerced marriage), child labor, and even organ trafficking. With the rise of cybercrime, child trafficking is linked to the worrying increase in online child pornography. For example, Thailand and Cambodia have been identified as major suppliers of child pornographic material.

The third is the underreported rate of cases. Human trafficking had been underreported, under-detected, and under-prosecuted. The crimes remained hidden, and the fear of intimidation and reprisals oppressed the victims. Most of the victims of human trafficking were children and women who were not strong enough to defend their rights. Most of the Southeast Asian female victims migrated or traveled in search of paid jobs, but they ended up becoming the victim of human trafficking. Children who were deprived of their families were also forced to perform labor.

Some experts have warned that the coronavirus pandemic would continue causing an increase in human trafficking in Southeast Asia. The first trend is that the risk of exploitation, including forced labor and child labor in Southeast Asia, has been increased. COVID-19 not only has posed severe health risks for the vulnerable groups but also put the survivors in exploitative employment. The International Labor Organization  (ILO) reports that COVID-19 has created economic and labor crises, which would increase global unemployment by almost 25 million.

Another emerging issue is the underreported cases, or so-called dark figure, in the human trafficking during the pandemic. The dark figure increases due to the extended social distancing policy, which has made governments harder to detect cases. The COVID-19 has been risking all the anti-human trafficking efforts in the region. Women and children are especially vulnerable groups that are impacted by the COVID-19. Although governments have learned from the past about proper investigations and international cooperation against human trafficking and smuggling, victims are facing greater threats during and after the COVID-19 due to the slowing down of the government efforts and international law enforcement cooperation. 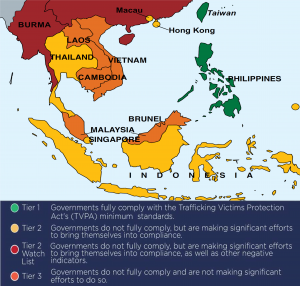 US Department of State

The third trend is the slowing down of anti-human trafficking efforts in the region. The COVID-19 not only poses threats to vulnerable communities across the region but also impacts the government responses to the increased risks of victims. Victims of human trafficking are more exposed to the COVID-19 virus, less equipped to prevent it, and have less access to healthcare. However, it has become harder for governments to provide testing and treatment for the victims.

The best way to combat exploitation is through preventive measures that require face-to-face assistance such as education, food distribution, financial assistance, and emotional support. There is much work to be done, and governments should do it differently. Governments in Southeast Asia have to establish proper guidelines and protocols for dealing with human trafficking cases during the pandemic, and the government should set up proper arrangements for people who are disturbed or dislocated from their area so that they do not get caught by the human traffickers. Governments and civil society groups must have active participation and partnership with international partners to make sure that the laws against human trafficking are followed thoroughly.  In preparing the post-COVID-19 situation, governments should emphasize more about victims’ assistance to overcome the trauma and hardships associated with trafficking during the pandemic, and to establish trust in law enforcement and to reduce the underreported cases. 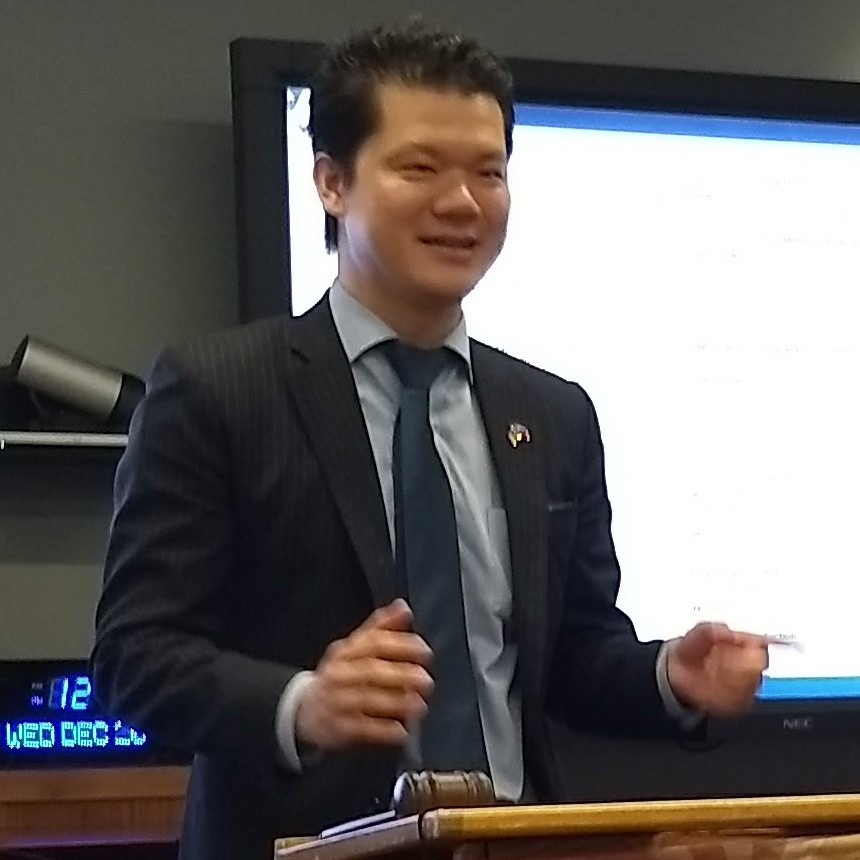 Leo Lin
Leo Lin is an analyst with Titan, Atlas Institute for International Affairs. He is also the co-chair of a discussion group with the Young Professionals in Foreign Policy in Washington, D.C. Lin specializes in non-traditional security issues and Asia-Pacific security.
Tweets by theatlasinst