The Turkish Approach in the Libyan War

Following the signing of a maritime and a military agreement between Turkey and the Government of National Accord (GNA) in November 2019, the layout of the conflict has considerably changed. Triggered by Turkish interests in energy exploration activities in the eastern Mediterranean, the maritime deal created an exclusive zone that allegedly entitled Ankara and the GNA to exploration drilling rights in the region. In turn, the military deal, which was followed a month later by the Turkish parliament’s approval to deploy troops to fight in Libya, sought to help the GNA roll back the eastern-based Libyan National Army’s (LNA) 14-month campaign led by General Khalifa Haftar to take the capital Tripoli.

Despite the pandemic that afflicts the world, the GNA-Turkey alliance’s campaign intensified in May and has been successful in turning the table in the conflict. In order to do so, Turkey considerably improved the GNA’s air and ground capabilities. Ankara deployed medium-range US-made MIM-23 Hawk missile and Hisar short-range surface-to-air missile systems (SAMs), in addition to Korkut anti-aircraft guns and Bayraktar TB2 drones. This equipment was used to protect valuable infrastructure, drone ground stations and launch operations, hit LNA ground targets, supply lines and air bases. Furthermore, because of the desert, open terrain typical of the region, they were very useful giving air cover to pro-government troops so that they could move forward more safely.

Training teams composed of Turkish military advisers were also sent to Libya, as well as thousands of Syrian mercenaries, many of whom received training in Turkish camps before heading to the African country. Fighting in Libya is reportedly a very attractive opportunity for mercenaries. Compared to Syria, where they are said to receive an amount worth around US$46 a month, in Libya they earn an estimated US$2000 monthly.

Previously cornered in Tripoli suffering intense pressure from the LNA, the GNA- Turkey alliance virtually wiped out Haftar’s forces from northwestern Libya. The alliance’s biggest accomplishments were the capture of the strategic airbase of al-Watiya – where the LNA launched strikes against Tripoli -, followed by the clearing of LNA-aligned forces from Tripoli frontlines and the recapture of the capital’s international airport, and the takeover of Tarhuna, a major supply point from the al-Jufra airbase for Haftar’s forces. In addition to other territorial gains that gave the GNA control of land up to the Tunisian border, as of June the territorial distribution looked like this: 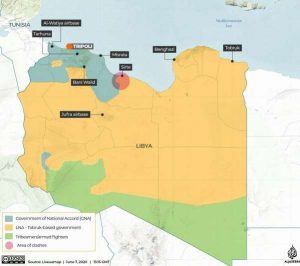 The changes in the scenario of the war and Egyptian President Abdel Fattah al- Sisi’s fears that Turkey was getting closer to the Egyptian border, in addition to Ankara’s perceived interference with Cairo’s own energy exploration plans in the eastern Mediterranean, prompted the Egyptian president to propose a ceasefire – the Cairo Declaration – under which all the fighters aligned with the GNA would have to leave Libya and turn in their weapons to the LNA. Following Ankara’s prompt refusal of the proposal, al-Sisi declared that Egypt had international legitimacy to intervene in Libya and labeled the cities of Sirte, situated along the coast, and al-Jufra, in the center of the country, as “red lines” that must not be crossed. A stalemate was formed with Turkey saying that a ceasefire would only be discussed if all parties returned to their positions in accordance with the 2015 agreement, which meant that Haftar would have to withdraw from both Sirte and al-Jufra.

Aside from light clashes around Sirte, the only recent escalation in the conflict were the air strikes on al-Watiya airbase on 5 July, which Turkey has not yet retaliated against likely due to the recent announcement that Russia and Turkey had reengaged in negotiations for a ceasefire. Tensions, however, are likely to soon erupt around Sirte, especially if such negotiations do not bear fruit. Recent reports have shown that the LNA’s naval forces started to secure the coastal line between Sirte and the Egyptian border, and thousands of fighters were sent to the city. In turn, the GNA-Turkey alliance also deployed troops, as well as heavy equipment, weapons and 200 military vehicles.

The Cairo Declaration is backed by the LNA’s other rivals, namely the UAE and Russia – although Moscow’s support to it is likely mostly rhetorical – and the Egyptian “right to intervene in Libya” has recently gained official support from the Tobruk-based House of Representatives, the parliament affiliated with Haftar’s LNA. Should the battle for Sirte come to happen and should the GNA-Turkey alliance come out victorious, a major escalation of the conflict cannot be ruled out. 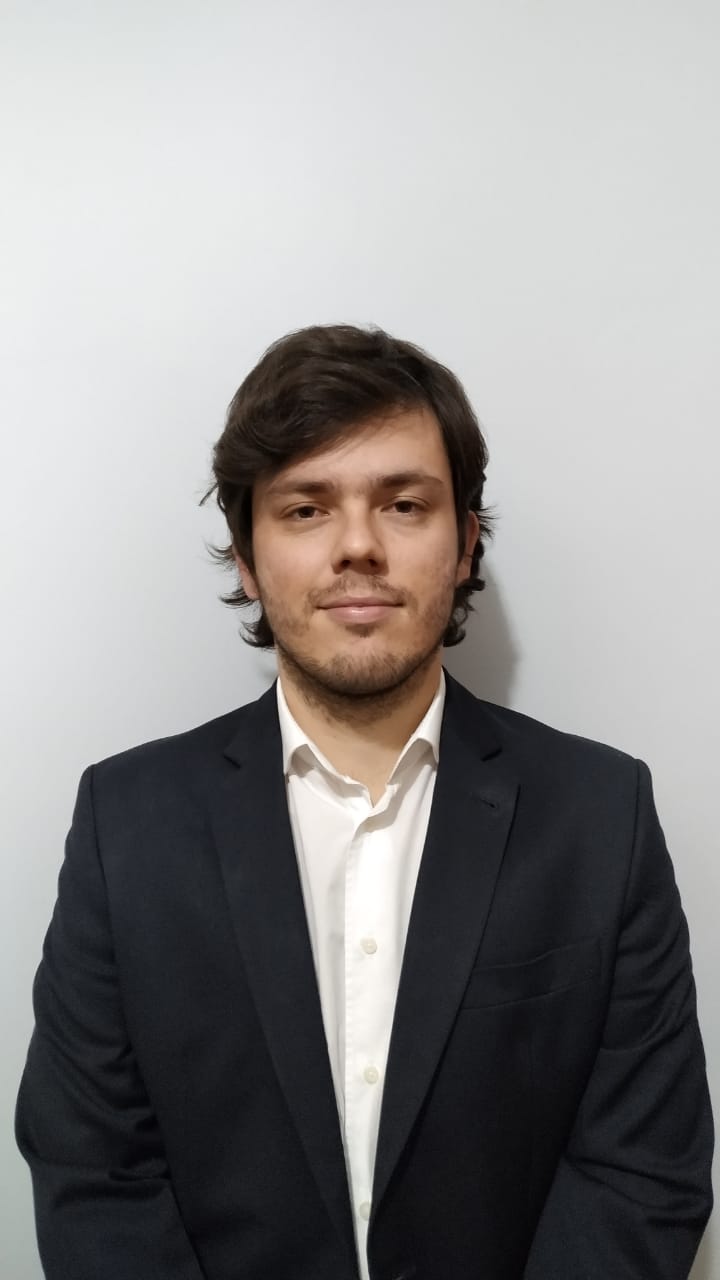 Marco Túlio Lara holds a specialization in international geopolitics and defense from the Federal University of Rio Grande do Sul, in Brazil. He has collaborated with London-based risk consultancy AKE International and currently contributes to reports and analyses at Le Beck International, a geopolitical security consultancy based in the Middle East. He is also an analyst at Gulf State Analytics, a geopolitical risk consultancy based in Washington, DC. He conducts research on the MENA region, focusing mainly on foreign policy, conflicts and security. He is a regular contributor to The National Interest.