The significance of the street level protest movement that erupted across Iraq’s center and south in 2019 may be neglected as the region grapples with the consequences of the assassination of Qassem Soleimani by a US drone strike in Baghdad on January 3. However, street protests have been a regular feature of Iraqi political life since 2011, having also occurred in 2012-13, 2015, 2016, 2018 and now, in 2019.

Starting on October 1, mass demonstrations occurred in Baghdad, Nasiriyah, Samawah, Karbala, Hillah and at a critical juncture, the holy city of Najaf. The vicious response from the security forces, with the support of Iran, left over 400 dead and eventually led to Prime Minister Abdul Mahdi offering his resignation on November 29.

Historically, the causes of these popular insurrections have varied. The ‘sectarianization’ of Prime Minister al-Maliki’s time in office (2006-14) was instrumental in mobilising Sunnis to take to the streets, and arguably, creating a legitimacy deficit that was exploited by the Islamic State leading up to 2014. Since then protests have largely been centered in the Shi’a-majority south and in the center and have been aimed at improving the quality of governance provided by the political elite in Baghdad.

The most recent protests are no different, although the role of Iranian influence in domestic affairs has taken on greater salience. Although the October protests were triggered by the contingent event of a popular Counter-Terror commander being demoted, the underlying structure of the political economy remains the primary cause and focal point of the protest. How then, has this structure led to widespread unrest?

Oil: A Blessing or a Curse?

Losing, and then retaking a third of the country from the Islamic State between 2014 and 2018 had a significant impact on the economic health of Iraq. The macroeconomic effects of the long campaign against the Islamic State, are illustrated in Figure 1, where Iraq suffered a steep decline in GNI per capita which has only recently stabilised.

A near-total collapse of the economy was avoided, partially because the less economically productive and sparsely populated Anbar Governorate formed a significant part of the Caliphate, but also because of the steady increase in oil production during this time. Consequently, oil production accounted for 65% of GDP in 2018 and 90% of the government’s revenue. However, this reliance on state-driven oil production (which is examined below), has produced a ‘bloated’ public sector, which accounted for 52% of Iraq’s GDP between 2005 and 2012.

Unlike in rentier states like Saudi Arabia and the United Arab Emirates, there is no mechanism by which civil society’s support for the existing regime can be exchanged for a stake in the economic wealth generated by oil production. Instead, a small minority have benefitted from employment within the bureaucracy – the total number of employees in the Ministry of Oil has doubled between 2011 and 2018. Furthermore, figure 3 shows how the total compensation paid to public sector employees has exploded in the post-Ba’athist era.

Although much of this compensation is paid to the security services, the figures exclude individuals who work for the National Oil Company, which was reconstituted in March 2018. Intended to transform Iraq’s oil production into a recognisable international commercial enterprise, ‘in practice, the company exists only on paper and its constitutionality is questionable’.

Allegations of corruption have been made against senior officials in the Kurdistan Regional Government (KRG) and in Basra, where international oil companies are expected to ‘make large upfront payments as part of their bid to win field development contracts’. Additionally, many state-owned enterprises have ceased economic activity, but still have large numbers of employees on the payroll, claiming salaries.

It is therefore not surprising, that Iraq has scored between 16 and 18 on Transparency’s Corruption Perception Index (where 0 = total corruption and 100 = no corruption), placing them 168th out of 180 countries in 2018. When this is contrasted with the fact that youth unemployment has stubbornly remained above 16% for a decade, it becomes easier to explain the sustained sense of injustice in the street against those who control the economic and political resources of the state.

Crucially for the medium and long-term future of Iraq, there is no easy solution to these economic conditions due to the absence of a robust private sector. The World Bank concluded that ‘Limited growth in the private sector is a direct hurdle to large-scale employment creation, especially for young Iraqis. The private sector remains relatively small, does not contribute significantly to income generation and fails to absorb and contain unemployment’.

Consequently, Iraq’s reliance on state-led economic growth based on oil has left the country vulnerable to exogenous shocks – such as the predicted slowdown in global demand for oil in 2021 and uncertainty over the renewal of the OPEC+ agreement. The underlying (and ever-increasing) risk of armed conflict across the region compounds these uncertainties. The assassination of Soleimani could therefore turn out to be a sufficient (although not necessary) cause to trigger a collapse in Iraq’s economic and social fabric if conflict between Iran and the US breaks out.

An unintended result of the coalition’s campaign against the Islamic State has also contributed to the 2019 protest movement. Patronage links between the central state in Baghdad and militia groups that gained prominence in the fight against ISIS have undercut the peoples’ confidence in the government. Many of these groups, operating under the Hashd al-Shaabi umbrella, have strong ties with Iran’s Islamic Revolutionary Guard Corps (IRGC), and are instrumental in exploitative practises, such as smuggling, that deprives the public of the benefits of oil production.

Map 1 highlights the range of actors involved in smuggling operations, which trace their origins to Saddam Hussein’s efforts to circumvent comprehensive economic sanctions imposed by the UN Security Council in the late 1990s. As a result of these illicit activities, Basra, the country’s most important oil-producing region, is reportedly ‘run by mafias’ who operate with the implicit support of the state. 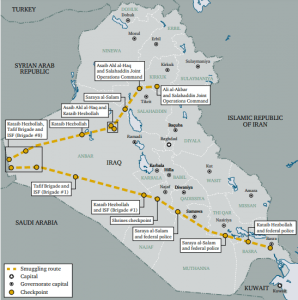 The links between the state, militias and smuggling are highlighted by the range of actors involved in the operation, including Iraqi Security Forces, Federal Police, Army units, Iraqi nationalist militias such as Saraya al-Salam and Iranian-aligned groups such as Kataib Hezbollah (which had been blamed for the death of a US contractor, several days before the attack on Soleimani). Critically, although Soleimani is generally considered to be an important factor in the establishment of Tehran’s transnational network, Iran is a powerful state that has institutionalised these links. Consequently, they will survive Soleimani’s death.

Whilst Soleimani’s assassination will likely form the backdrop to political action in Iraq over the next year, the economic and social challenges that the country faces must not be neglected. Unfortunately for Iraq and its citizens, the incident may have a solidifying effect on the divide between the political elites in Baghdad who chanted ‘Death to America’ in parliament following the incident, and the protestors who, tired of Tehran’s interference in Iraqi politics, burnt the Iranian consulate in Najaf on November 28 – although it must be noted the protestors have never been pro-American.

In any case, geopolitical maneuvering will hold no resonance whilst endemic corruption and poor public utilities exert heavy downward pressure on the standard of living for the average Iraqi. Consequently, the main barrier facing Abdul Mahdi’s successor (when he eventually leaves office) is how to disentangle the interconnected patronage networks, both internal and external, that produces and reproduces the bloated public sector and rampant corruption that characterises governance in Iraq – all whilst the US and Iran continue tit-for-tat escalation.